On Sunday 20th May, 7 blokes from the club ran the Manchester 10K aiming for a sub-50, but achieving just over an hour…in pads and on a very hot day in the middle of exam season at the start of the UK heatwave. The odds were not in our favour, but nobody ran it in over 90 minutes. 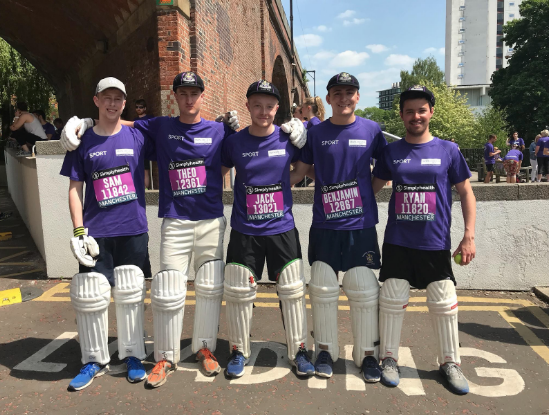 Pictured: Pre-run cricket at the meeting point, before the run in sweltering heat

Despite the hot weather and the self-induced unpleasantness with the pads, we ran to raise money for the Manchester Access Fund, part of a programme run by the University of Manchester for students around Greater Manchester who have secured the academic credits required for university, but are unable to attend owing to financial constraints. The fund contributes to financial aid for these students, in the form of a bursary or donation.
It was a rewarding day for the UMCC, as at least half of the runners might not be labelled as the most athletic in the club, but nevertheless came forward and signed up to run for this great cause, completing it in less than 75 minutes, padded up. It even encouraged two non-runners to take on the Manchester Half Marathon in October!

Unlike the intrepid groups of lads who ran in their pads the 5 of us girls who ran it did without and still sweated their way through the sweltering 10k with hardly any training. It was an extremely hot but rewarding day and such an enjoyable event to take part in and we also raised just over £200 for Care4Calais, a charity close to a few of our hearts.